Living in an age of extinction III: The Lost Bird Project Film Review 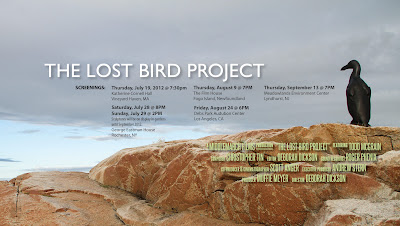 Quick, how many extinct birds of can you name?
Most of us could probably name the Passenger Pigeon, famous for flocking across the sky so thickly that they would eclipse the sun, and the Great Auk, a flightless bird in the puffin family that once thrived in the . Beyond those two, few of us would know about the Heath Hen, the Labrador Duck or the Carolina Parakeet, three other birds that have gone extinct in modern times. “Forgetting is another kind of extinction,” says Todd McGrain, the artist whose work is profiled in The Lost Bird Project, a fascinating documentary film and project that aims to rescue the birds from cultural extinction.
According to the International for the Conservation of Nature (IUCN)
since the year 1500, human activity is known to have forced 869 species to extinction. In his excellent book, Hope is the Thing with Feathers, Christopher Cokinos frames it for us for the future: “within the span of my life up to one-fifth of species will be gone,” an extinction rate that is more than 1000 times the normal rate.
Inspired by Cokinos’ book, The Lost Bird Project (also discussed in this post), directed by Deborah Dickson, is a light-hearted film about a serious subject: how can we memorialize extinct species? McGrain’s answer, and an answer that is long, long overdue, has been to create larger-than-life bronze sculptures of these five birds and install them in places significant to where the birds last thrived. “We can’t allow these extinctions to be thought of as a natural process,” McGrain says. “Memorializing them helps keep their memory alive.”
In the film, McGrain, and his brother-in-law Andy Stern, go on a wild goose chase around the Eastern US and to properly situate the memorials. The film opens with a large crate being brought by helicopter to barren and rocky . Inside the crate, we find out in the next scene as McGrain puts his hands into buckets of clay and begins forming shapes, is the story of the five extinct birds, a mix of the known and unknown, lost to biology and now on the verge of being lost to history.
It is the compelling nature of these birds’ stories as much as the effort to situate the memorials that drives the film. The Heath Hen is portrayed as a dancer, a singer, and a fighter. Footage of the closely related prairie chicken’s elaborate courtship display shows males booming and thrusting out their chests to win the attentions of the females. Though they once thrived on the coast from to , by 1870, overexploitation had wiped out the coastal population leaving only a few hundred survivors on . The state of did enact measures to save the population, but numbers continued to dwindle. By 1929, there was just one left, famously known as Booming Ben and he was once seen calling out repeatedly from the top of a tree. No answer came.
McGrain quotes a Samuel Beckett line that most writers and artists know, “Fail better,” and this becomes the subtext for the film and the entire Lost Bird Project. McGrain’s first pitch for a memorial to the Heath Hen in a state park on is turned down. Stunned by the denial, he resolves to “fail better” in order to appropriately honor the bird. Evidently, this involves much behind the scenes courting of bureaucrats and this story is teased out over the course of the film. The sculpture is not some random memorial, instead it is “something that digs deeply and will add meaning to the place.” Having already seen the care that goes into making the sculptures, and been shown the Heath Hen’s remarkable story, we’re already onboard and rooting for McGrain to succeed.
On the road, McGrain and Stern track down bird enthusiasts and conservation biologists who might know anything about these lost birds. One of the tragedies exposed in the film is that we only see the Carolina Parakeet, a striking bird with brilliant green plumage and North America’s only parrot, in a drawer instead of chattering among the trees in one of its homes near . The demise of the Passenger Pigeon, described as a biological storm, is linked to the new rail transport, which could transport millions of hunted birds across states in a day or two, where they could be sold at market. The Duck -- presented in McGrain’s memorial as a form that elegantly folds back in on itself -- gets little screen time, because little is known about it, a victim of industrialization and habitat loss. Indeed, we barely know how much we’ve lost and the film evokes a sense of a former glory of sound and color in the thickets, among tree tops and along the coasts.

With an upbeat, eclectic score provided by Grammy-award-winning composer Christopher Tin, and Stern's comic relief to McGrain's dedicated mission, the tone of the film tightropes between quirky road trip and a deeper elegy.  As the two men successfully negotiate the installation of the memorials, the stories all gather strength so that by the time we visit , to hear the tale of the Great Auk, with its “Chaplin-like appeal,” the film takes on real gravity. The indigenous people of buried their dead with Great Auk beaks and these spectacular sea birds allowed the survival of the first settlers – just as itself was a refuge for the birds to come ashore and lay their eggs. Ungainly on land, they were easy to kill and were hunted for their down. But before we start thinking this is all history of a century ago and that we know better now, a woman reminds us of how the same market forces that decimated the Great Auk also decimated the cod and drove it to the brink of oblivion.

At the unveiling of the Great Auk, locals clamber over barren rocks for the christening ceremony. Like the other memorials, the Great Auk sculpture is big enough to make a statement, with smooth curves that long to be touched, for touch, McGrain says, “is literally how we come in contact with the world.” After ceremonial flares are lit, a few people line up to kiss its beak. One gets the sense that at last, the Great Auk has come home.
The importance of the film, now making the rounds at film festivals but deserving of a much wider audience, is not just to honor these lost birds but to help us to understand these birds better, to grieve for their loss by “opening a portal into learning their stories”. Forgetting is a kind of extinction. Ultimately, the Lost Bird Project is a hopeful film. The memorials are triumphs of personal perseverance and totems for our cultural memory. Now there are five places in where people who knew nothing about these lost birds can delve into their stories. By learning their stories perhaps we can indeed fail better and turn these past failures into future successes.

Stay tuned for an interview with Todd McGrain, coming soon.
More information about The Lost Bird Project, including a film-trailer, can be found at their website.