Living in an age of extinction II: Creating a Life Cairn 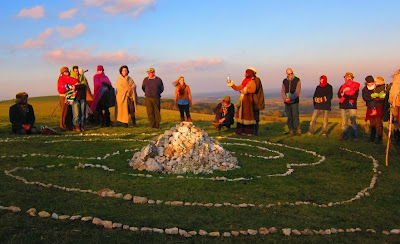 Why do no church bells ring when animals go extinct?

This was one of the questions that came up when Andreas Kornevall met with Reverend Peter Owen-Jones over a cup of tea and a plate of Indian curry. Kornevall had recently been to a workshop where a Guatemalan man related how he had lost his land and his culture and in relating his story the man became overcome with sorrow. Kornevall realized the men in the room were not accustomed to this public display of sorrow from another man and came to see how important it was, that grief was a way into thinking about the environment and change.

I caught up with Kornevall over Skype to ask him about the Life Cairn (previously mentioned here), which was begun over a year ago on in East Sussex, .

Daniel Hudon: Here in North America, we mostly see as ways to guide hikers on mountain paths, but in I understand they have an additional meaning.

Andreas Kornevall: That’s right, we also use them as markers, but for thousands of years, people here have been using them also as burial chambers. Around here (in East Sussex, ), there are many tumuli, which are mounds of graves, and they might have begun as . Reverend Peter Owen-Jones has hosted a show in the BBC called 80 Faiths Around the World, and during our discussion we hit upon the idea of a cairn, a Life Cairn, as a way to mark the passings and address the passings of species that were going extinct. It began as a way to express our grief.

DH: How did you pitch the idea of the Life Cairn to the community?

AK: We held a meeting and about fifty people came – really a good amount of interest from a wide variety of people. People liked the idea. We’re just one stone; we hoped others would come and build on it.

AK: It’s hard to say what goes on in the minds of people. The first to lay stones were the youngest and the oldest who were present. According to tradition, water was put in the cairn. People came from all around to place their stones -- it’s on the eastern shoulder of , with a great view of the landscape and the sea. Though the whole project came from a place of grief and sorrow, there were songs and poems. It became festive. We were all wind-blown. Maybe it was something in our DNA, something from our burial customs – that go back thousands of years – when we were gathered around like that it felt like it needed to be done, this showing respect. It has been missing; at earlier times and in other cultures we showed more respect for animals – it’s been practiced before but it’s been forgotten now. Some say animal tracks are how we first learned to read – a debt we have forgotten. But yes, it became a happy event. People felt it was important to have paid tribute.

DH: What has happened since the Life Cairn was founded?

AK: People continue to come and lay stones. There are now about 3000 stones at the Life Cairn. There are no signs, no markings. It’s all word of mouth.

Since the opening, there have been spontaneous gatherings and poetry events, we’ve brought school groups up there for educational events about extinct species. 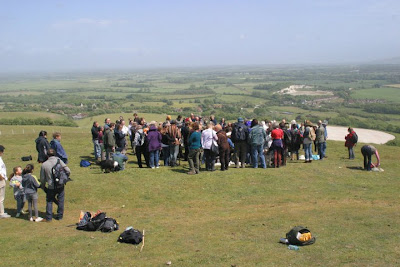 DH: Are you planning other Life Cairns?

AK: We just put one in the middle of . We started one in [which has more endangered species than any other country]. We have one planned with Catholic and Protestant priests in . That’s on September 15. It’s like a water hole, a shared sense of responsibility. You’re there as a human being. It will be an open ceremony. Anyone can come.

Beyond that, I’d love to get one in every country. I’d love to set one up in front of the White House! (laughter)

DH: Setting one up in front of the White House would be something. How do you see the Life Cairn now? How are people treating it?

AK: Practically, as I said, as a place where we can gather to express our grief. It’s not an activist project. If it was an activist project, we would have put it in the center of  . It’s a place for quiet reflection, for sanctuary. We lost two subspecies of rhino last year. When the Yangtze dolphin – the “Goddess of the River” – went extinct in 2006, there was no news. Same with the Pyrenean Ibex. We’re in the silent phase of the Sixth Extinction. But just as there’s an external climate change, we hope this will help create an inner climate change on how we relate to our environment, to overcome our feeling of being detached and blasé.

DH: An “inner climate change” is quite provocative.

AK: Well you know it’s true. The language of environmentalism is leaving us inert. Extinction is abstract. CO2 is abstract. But biodiversity is not abstract. We grew up playing in trees, running around in the woods, chasing rabbits. This is not abstract. Look at things like “parts per million” and the statistics, these are facts that freeze us to death. Language is not communicating the depth of the problem. And certainly after we see that language is not communicating enough – nations are not taking responsibility.

The vitality of the problem is missing and that’s how getting in touch with grief can help. There are no historical parallels here. As Aldo Leopold said, “For one species to mourn for another is a new thing under the sun.” 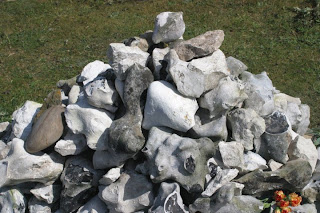 DH: Reverend Owen-Jones has a nice quote to summarize the project. Can you share that with us?

DH: Thanks for your Life Cairn. It’s a new way for us to consider the biodiversity crisis and to respond to it in a meaningful way.

AK: Thanks for giving me the chance to talk about it.

Readers can visit the Life Cairn's Facebook page for more information, photos and videos. And if you're heading to East Sussex, bring a white stone for the Life Cairn.

Find out about Andreas Kornevall's other projects, like the Earth Restoration Service, involved in proactive ecosystem restoration worldwide and Restore the Earth, which asks, "Will you leave a positive handprint on the Earth?"
Posted by Eco-Now at 8:04 AM